On 10 Oct. 2017, National Astronomical Observatories of Chinese Academy of Sciences (NAOC) and Bureau of Science Communication of CAS held a press conference at NAOC to announce the first discoveries using the Five hundred-meter Aperture Spherical radio Telescope (FAST), the world’s largest single dish radio telescope. FAST is operated by NAOC and is located in Guizhou Province, China. Two new pulsars were discovered in the Southern Galactic plane, i.e. PSR J1859-01 (FP1 or FAST pulsar #1), and PSR J1931-01 (FP2 or FAST pulsar #2). These two new pulsars have just been confirmed by the Parkes telescope in Australia.

During its first year, FAST successfully commissioned several observation modes, including pointing, drift scan, and tracking. FAST has so far detected dozens of promising pulsar candidates during the commissioning, two of which have been confirmed by other telescopes. These represent the first pulsars ever discovered by a Chinese radio facility. The progress of FAST commissioning exceeds expectation and generally outpaces other international facilities of similar scale.

Pulsars are rapidly rotating compact stars subject to physical conditions far beyond the reach of any laboratory on Earth. These astrophysical laboratories can help answer many fundamental physical questions. For instance, some pulsars spin at a very fast and steady rate, and thus form a web of precise cosmic clocks. They can be used as tools for important scientific or technological developments, such as detecting gravitational waves and navigating spacecrafts.

There are believed to be a vast number of pulsars in our Galaxy, however, only a small portion have been discovered, since most of them are weak radio sources or masked by radio interference produced by human activities. Located in a radio quiet zone protected by law, FAST will become the most sensitive radio telescope in the world and an ideal instrument for identifying new pulsars. The pulsar timing array (PTA) experiment attempts to detect low-frequency gravitational waves from merging supermassive black holes using the long-term timing of a selected set of stable millisecond pulsars. FAST is expected to find many millisecond pulsars and contribute significantly to the PTA experiment.
In the next two years, continued commissioning of FAST is planned until it reaches the designed specifications and gradually becomes an open facility for Chinese and international scholars. The FAST group also plans to conduct further tests and optimization of the survey plan and generate science output along the way. These two new pulsars symbolize the dawn of a new era of systematic discoveries by Chinese radio telescopes.

FAST is a Chinese mega-science project to build the largest single dish radio telescope in the world. It had first light on 25 September 2016. The main observables of FAST are pulsars, the 21cm atomic hydrogen hyperfine transition, molecular transitions including masers, and radio continuum. Its unparalleled sensitivity and excellent survey speed should allow astronomers to vastly expand the total volume of knowledge on compact objects, gaseous galaxies, and the interstellar medium.

For more details of pulsars discovered by FAST, please refer to  http://crafts.bao.ac.cn/pulsar/ . 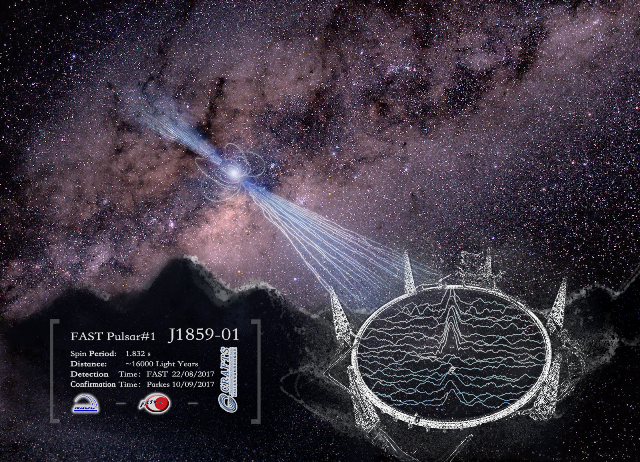 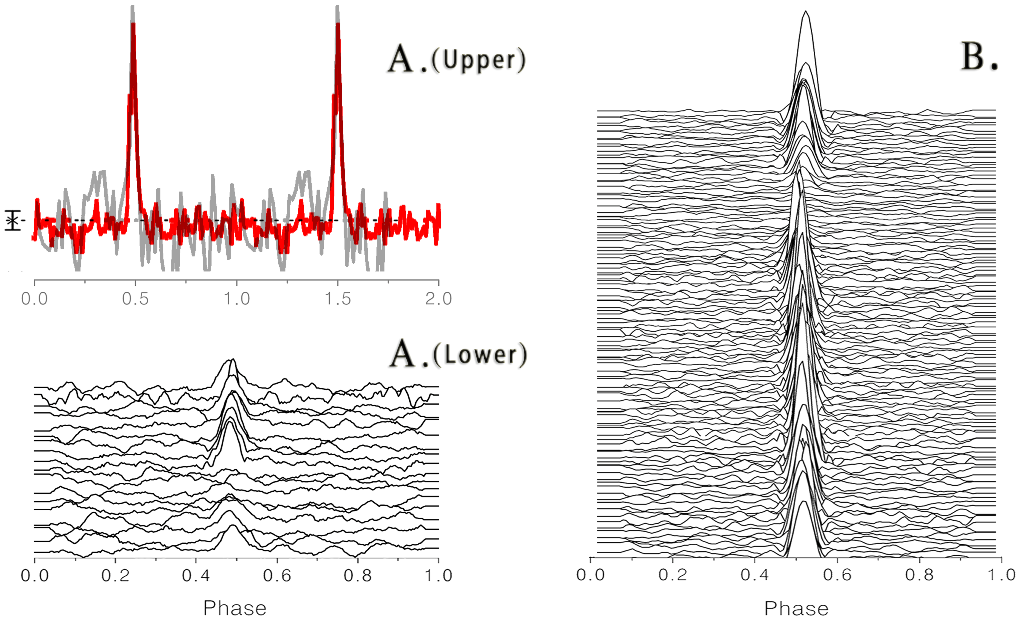 Fig2. The integrated pulse profiles of the new pulsars: Panel A (upper) shows the profiles of FP1, the gray one comes from 2100 second Parkes tracking observation, and the red one comes from only 52.4-second drift scan using FAST, demonstrating the superior sensitivity of the new telescope. Panel A (lower) shows the observed single pulses from FP1. Panel B shows the single pulses collected from the other new pulsar FP2 in a 5-minute tracking observation of FAST. (Image by Pei Wang of NAOC)